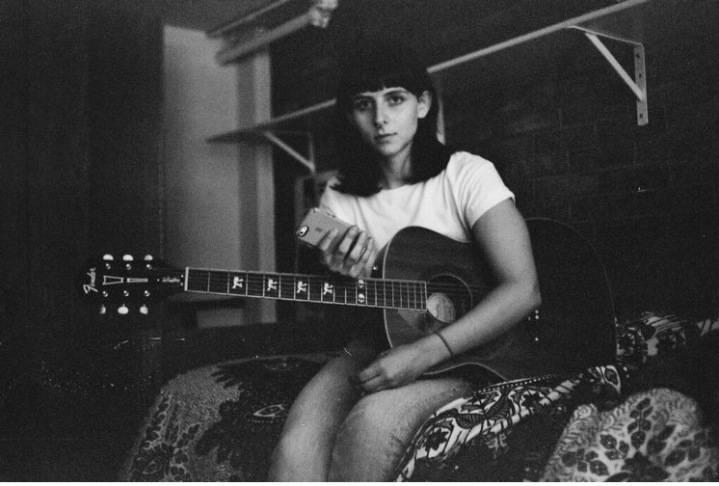 I recently met with Philly musician Stone Cold Grace (her “real” name is Sara) at Elixr. The name Stone Cold Grace is in reference to a Joni Mitchell (of whom she is a very big fan of) lyric from her song, “People’s Parties”.

I immediately knew the girl with the guitar in the coffee shop would be Sara (she was planning on heading to an open mic after our chat). We settled into our seats and began an honest yet comfortable chat over Drake blasting over the sound system (I’m reminded of this as I listen to the voice memo of our conversation).

Our meeting was initially to discuss her music, which we did, but it quickly stemmed into something more. We delved into more personal topics – from comparing ourselves to others, being a female musician, staying true to your art, the struggles and triumphs of songwriting and the feeling of not being taken seriously as a woman.

She’s been playing the guitar for ten years now, although she’ll tell you she’s “only been good for a few years”. In addition to her musical and songwriting abilities, she’s also proficient on the technical side of the music industry. She’s currently interning at MilkBoy recording studio, where she is learning all aspects of the recording and producing side of the music industry.

Before you read our interview, I was to emphasize how much she impressed me (not that she needed to!). At the young age of twenty, she has taken her career in her hands and is molding it into something meaningful and sustainable. Meet Stone Cold Grace.

Thank you so much for meeting with Positive Publicity. To start our interview, how would you describe your music?

If you like artists like Julia Jacklin and Phoebe Bridgers, you’ll most likely enjoy my music as well. It’s not complex in form or ideas, and I mostly write lyrics around my own experiences, or versions of that experience. Most of my lyrics start from poems I write in my journal. I strive to make music that others feel like was written for them. To generalize my music in terms of genres, I’d say right now I’m well into the folk category (though that’s subject to change).

With your stage name being inspired from a Joni Mitchell lyric, other musicians seem to be a huge inspiration for you. What musical artists to you look up to?

The big few are Joni Mitchell, Bruce Springsteen, Julia Jacklin, and Catfish and the Bottlemen. There are others, but whenever I talk about music it tends to revolve around these artists. All of these artists exhibit strong lyrical quality, and have the ability to tell distinct stories that, to me, are very compelling. There’s a rawness to them that makes it so relatable, especially with Bruce Springsteen & Julia Jacklin. It feels very working class, which is who I am and who I stand for right now. It feels like those songs were written for me; its personal.

For me, it’s stepping back from the source of my doubt. Whether it’s spawned from social media or my own thoughts, I try to break away from that feeling and channel it into my work. If I’m having doubts, it means that there’s something in my music that I feel could improve. I try to focus on myself instead of others. I’ll read a book or hang out with a friend. Once I get into my head about comparison, it’s hard for me to break that thought away. I need to step back and fight the doubt.

Name a struggle you experience being a female musician.

Not being taken seriously. I’m sure that’s an answer you’d get from plenty of other women, but there’s nothing like being in a space where everyone expects you to not know what you’re doing. I feel like this is heightened even more because of being a solo performer. Bands are generally given more attention.

Now, the loaded question – what do you want to get across to people?

When I listen to Joni Mitchell or Leonard Cohen, I get this feeling in my chest like, they are people who understand how I feel and are there for me, even if they’re technically not. I feel like in this day and age, we need a connection like that. I want to be someone people can look at and see that she worked hard for where she’s at. A lot of the artists I admire took their own initiative and sought out things on their own, and that’s the type of person I am.

Can we expect any new releases from you soon?

I have a single coming out on August 7th, with a good friend of mine, Sirena. It’s called “Louder,” and it’s an anthemic song about sticking up for yourself as a woman. It was the most fluent experience I had writing this song. It was the night before I was leaving from being in NYU for a songwriting workshop, and Sirena reached out to me asking if I could put lyrics to some chords she had written. It took me fifteen minutes to write lyrics for it. We even had friends come in and do chants for the song. I’m really excited for everyone to hear it. 🙂

Positive Publicity is committed to supporting female creatives, and I’m grateful for artists like Stone Cold Grace for speaking with me!