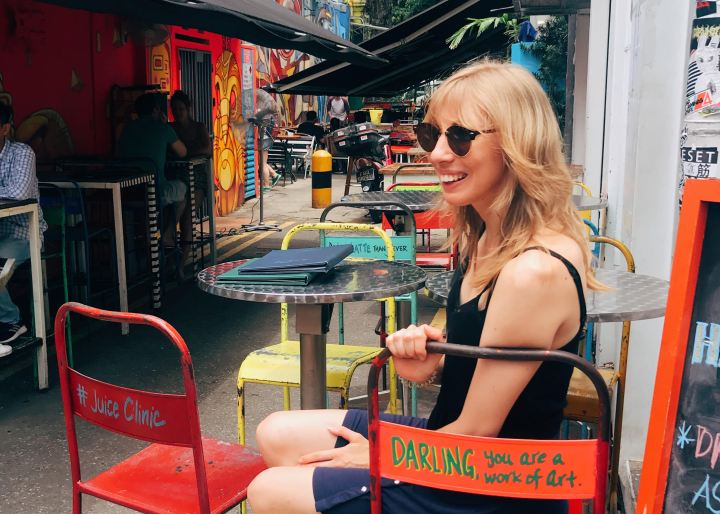 I heard I’ve got your respect at last, because I went for my dreams and you wish you had done that

You’re about to listen to my new summer bop – Cool Kids by British singer/songwriter Beth Keeping,

Creating songs that speak about real-life situations, Beth’s honest lyrics and emotive vocals have been garnering attention from fans and critics across the globe. Beth has found herself traveling the world, writing and recording in the UK, Singapore, Ireland, Estonia, Andalusia and America. Her debut EP Fool, which was recorded in Nashville, showcased her love for country music and its powerful ability to depict vivid stories through sound.

Her latest single “Cool Kids” is a self-empowering anthem for anyone who has experienced bullying, and I instantly gravitated to it. Despite its feel-good melodies, there is a juxtaposition between the music and lyrics, with a deeper element recognizing how serious bullying is and why we do it.

“Whether it’s at school or in the workplace, bullying happens when those who are popular or powerful in some way choose to use that power against others. And usually this behaviour is driven by something deeper such as insecurity, peer pressure, personal trauma or having been bullied themselves.”

As founder of ‘Write Like A Girl‘, an initiative that puts the spotlight back on female songwriters, Keeping is an advocate of championing the rights of women and equality in the music industry.

“It’s an idea I’ve had for years after I woke up to the gender imbalance at networking nights I was going to. In fact, only 18% of songwriters in the UK are women (PRS for Music, 2019)”.

Write Like A Girl hosts sell-out writers round shows in London, Newcastle and Bristol, and since lockdown have begun a Q&A series on Instagram called ‘Girl Power Hour’. Keeping has also seen success winning a PRS songwriting prize in a Mayor of London GIGs competition, as well as reaching #3 on the iTunes singer/songwriter chart for her debut EP.

Welcome! To begin, how have you been doing during this time of social distancing? Have you found inspiration in unexpected places?

Hi! Thanks for talking with me. I’ve found lockdown a mixed experience creatively – I’ve been up and down and have had some weeks where I’ve felt really inspired, and other times where I have no energy to create music. I miss in-person writing sessions where you’re feeling a vibe in the room and bouncing off each other creatively, but I’ve also enjoyed the challenge of having to write by myself, which I haven’t done in a while! I’ve been going for a lot of walks and I’ve found that getting out into nature gives me space to think and process what I’m feeling and what I want to say in my writing.

Tell us about your brand new single Cool Kids – what do you hope people walk away with after hearing this song?

I hope people feel happy and empowered. I’ve had a lot of messages from all sorts of different people saying how much they relate to the song and it made them feel better about their own experience of being bullied at school, which is amazing to hear! It’s all about coming out of a tough situation stronger and choosing to let it go, and remembering that high school dynamics change in the real world – we’re all cool kids in our own way.

Would you be open to talking about any experiences you’ve had that influenced you to write Cool Kids?

I wrote the song after finding out that a boy who used to bully me now respects me because I chose a different path and pursued music. The first verse contains all real things that happened to me – this particular boy’s surname was after mine in the alphabet, so we were always sat next to or near each other in class. He would sit behind me in maths and push my chair with his foot so I got pushed into the table. Every time I pulled my chair out he would do it again. If that were me now I would just turn around and tell him to stop…but when I was 11 I didn’t have that confidence to stand up for myself! The other lines are from things other kids said – silly insults teenagers shout in the street without thinking that sometimes stick with us into adulthood. It was quite a cathartic experience writing a song that’s so honest about my own physical “flaws”, recognising how those experiences shaped me and then lyrically choosing to let them go.

One thought on “FemFocused: Keeping it cool with Beth Keeping”