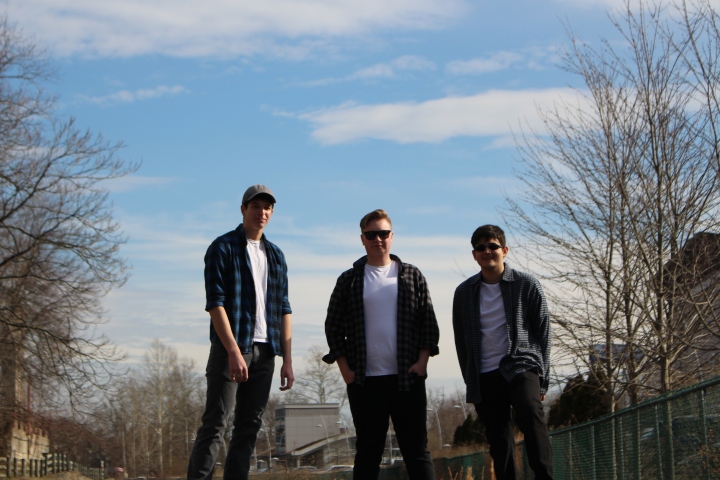 Without A Map is a three-person rock band playing around the Philly area. The three band members – Benji Elkins, Ben Marder, and Jack Niccoletti – started the band a few years ago in high school. Ben and Jack are both graduating seniors and Benji is a rising senior at Lower Merion High School. Ben and Jack are heading to college next year, so the band tells me that this is their last real chance to spread their music to the masses, but hopefully we’ll keep hearing from them!

They will soon be releasing their new single Change The Tides, so be sure to check out Without A Map on Instagram, Spotify, and Apple Music for the official release.

Welcome to Positive Publicity! To begin, how have you guys been doing during social distancing? Have you found inspiration in unexpected places?

Two of us, Ben and Jack, are seniors so we missed out on what was supposed to be the last hoorah of high school. But, we’ve been busy writing new music and that’s been keeping our spirits up. We’ve also taken this opportunity to expand our musical horizons and reflect on our first album, Parallels, to find ways to make our future work even better.

For example, Jack has been experimenting with different methods of writing lyrics. Benji has entered the realm of faster, more driving songs as opposed to the soft piano ballad style in which he typically writes. Finally, Ben, stepping out of his comfort zone, has started writing songs with lyrics — two of which will be on our upcoming album releasing later this summer.
As for unexpected inspiration, one of the tracks from our next album, “R.C.L” (Regular Cult Leader), was written after Ben and Jack binged the entire Waco miniseries on Netflix in one sitting.

Can you describe your sound/songwriting process?

Our sound comes from a lot of distinct influences. Jack comes from a very classic rock background listening to bands like Led Zeppelin and Jimi Hendrix. Ben is heavily inspired by pop punk bands of the early 2000’s such as Green Day and The Offspring. Benji’s influences, such as The Beatles and Jack Johnson, span many decades but ultimately all use music as a means to convey emotions. When you combine all of these elements together, you get a Without A Map song.

Lately we’ve been embracing the more modern side of music by experimenting with different instrumentation and different production techniques. You can hear this new sound in our upcoming single Change the Tide which releases on all streaming platforms on July 19th.

Fill me, an old head, in – how are high schoolers consuming and finding music these days?

These days to find new music, it’s all streaming platforms like Spotify and Apple Music. Jack however, has an unhealthy amount of vinyl records. He appreciates how with a physical record each LP has its own story.

Without A Map is heading in different directions after this summer – what do you think is next for the band?

As of now, we are trying to record as much music as possible and then stagger releases in the coming future. That way even if we’re apart, the band will still be active. As far as what happens afterwards, it all depends on where we end up. Ideally we would like to continue playing together in some capacity. After all we started this band for one purpose: to have a good time, and if there is a way to continue to have a good time then we will definitely find it.